In the Midst of Disaster: Meeting Planners are Priceless 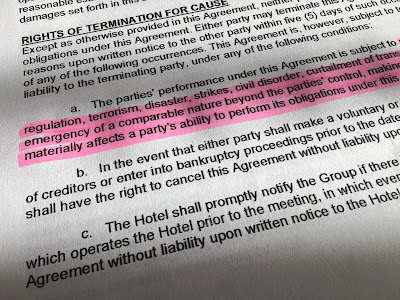 The meetings and event business is the backbone of many cities’ economies. Often times, the lack of tourism to an area following a natural or man-made disaster is more devastating to the local community than the actual disaster. The natural and man-made disasters that impacted the world of events in Q4 2017 alone, brought that message close to home. Additionally,  the importance of utilizing a certified meetings management professional to manage your programs has never been truer.

Hurricanes in September
This year saw the most expensive U.S. hurricane season in history, as storms caused more than $200 billion in damages across the country. If you had a meeting booked in Florida or the Caribbean (like andgreat did) in September, you likely heard the words “force majeure” more than once. Most meeting planners, including andgreat, were easily able to rebook their clients’ programs at other venues or rebook later into the New Year—with no penalty.

Shooting and Fires in October
andgreat was exploring Cuba on a FAM trip the first week of October, and many friends and family were worried about safety. andgreat was safe. Safer than most Americans in America. The mass shooting in October at the Route 91 Harvest country music festival in Las Vegas, really forced planners to take a hard look at event security. And again, threatened the tourism and conference business that supports Las Vegas.

Other Natural Disasters in November
The natural disasters didn’t end with hurricane season. Later in the month of October, a series of wildfires broke out in Napa and Sonoma counties, as well as other Northern California cities, destroying almost 9,000 structures, forcing more than 20,000 people to evacuate, and killing at least 41 people. Sonoma Valley is home to many events—especially wine tastings and corporate retreats. And as such, planners again had to rise to the occasion.  Needless to say, it is times like these when planners have two or more programs coming up and there are fires raging at the contracted venues’ doors, your local contacts and CVBs are priceless resources. andgreat is happy to say that both our programs in Sonoma in November went forward as planned, with no side affects or negative feedback. It felt good to bring business to an area that needed it.

Have you thought about how your company would handle these types of disasters without the knowledgeable assistance of a certified meetings management professional?

andgreat
Andrea Cannistraci is the President & Founder of andgreat—a marketing, branding, and events firm that specializes in helping small start-up technology companies design unique and unforgettable experiential marketing programs. Andrea is a seasoned marketer, with over 17 years experience across multiple functions of marketing. Prior to starting andgreat, she worked in marketing at several start-up tech companies. Notable is her time as Marketing & Events Manager for the Rubicon Project, where she directed major sponsorships, events and other partnering initiatives to help launch the company. Also notable is her time at OpenX, where Andrea built the experiential marketing department from ground up and created and managed an incredible series of high-profile events that established OpenX as a top tier ad technology company and successfully built online and off-line event strategies to convert prospect and customer relationships into revenue. Andrea’s greatest strengths are her creativity, drive and leadership. She thrives on challenges, particularly those that differentiate companies.